Become a shark attack guru. Teach your kids a thing or two. Empower them with facts about rays and sharks. It doesn't need to be Shark Week to pull kids from screens and get everyone celebrating these household names.

Discover differences between rays and sharks. They are fish and they are in the same family. However, they are unlike other fish, and unlike each other. These shark family members have no bones, have no swim bladders and may have no scales or teeth.

The book and this website show the pitfalls of stereotyping sharks as mindless eating machines. When sharks are caught, the pilot fish they protect and feed follow the fishing vessels for weeks. Sadly, their shark friends may never return.

Some fish, including stingrays, change colors as they grow. They also use this ability to blend into backgrounds. Rays know when to fight and when to be still. Camouflage may have played a role in the good ending to this story. 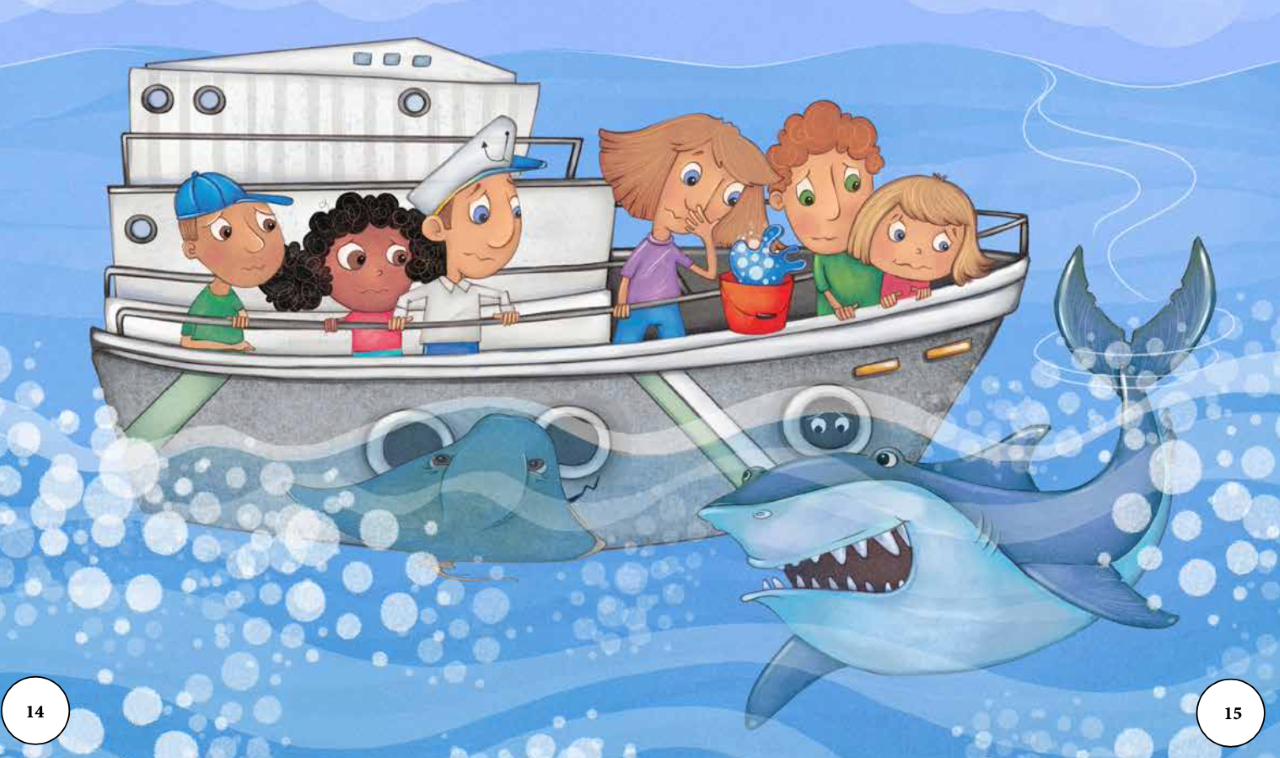 Arriving sharks can be seen from shore. Sightings allow swimmers to exit the water. Little Ray and a shark work together to get stranded boaters to shore. Natural enemies can coexist.

Problems with a few animals get blown out of proportion. One deadly shark attack can lead to many revenge killings. Millions of sharks die for the ten or so people they kill yearly.

Size and speed reign supreme in battles. Sharks are the largest predatory fish. Mass puts greater power behind their jaws. They can weigh ten times more than an adult person.

Shark attack fallout is not fun reading. It gives people reasons to swim at guarded beaches and stay out of the water at dawn, dusk or night. Little Ray's story ends well.

The boat has a hole in it, the engine is dead and a circling shark hasn't eaten. It takes a lot of grit for a family to tame fears, fix this mess and build friendships. Look for the book here.

Little Ray's shark encounter turns fear to fascination. Few fish are as feared. No other fish gets a week of celebration. What put this power-house commander under assault? 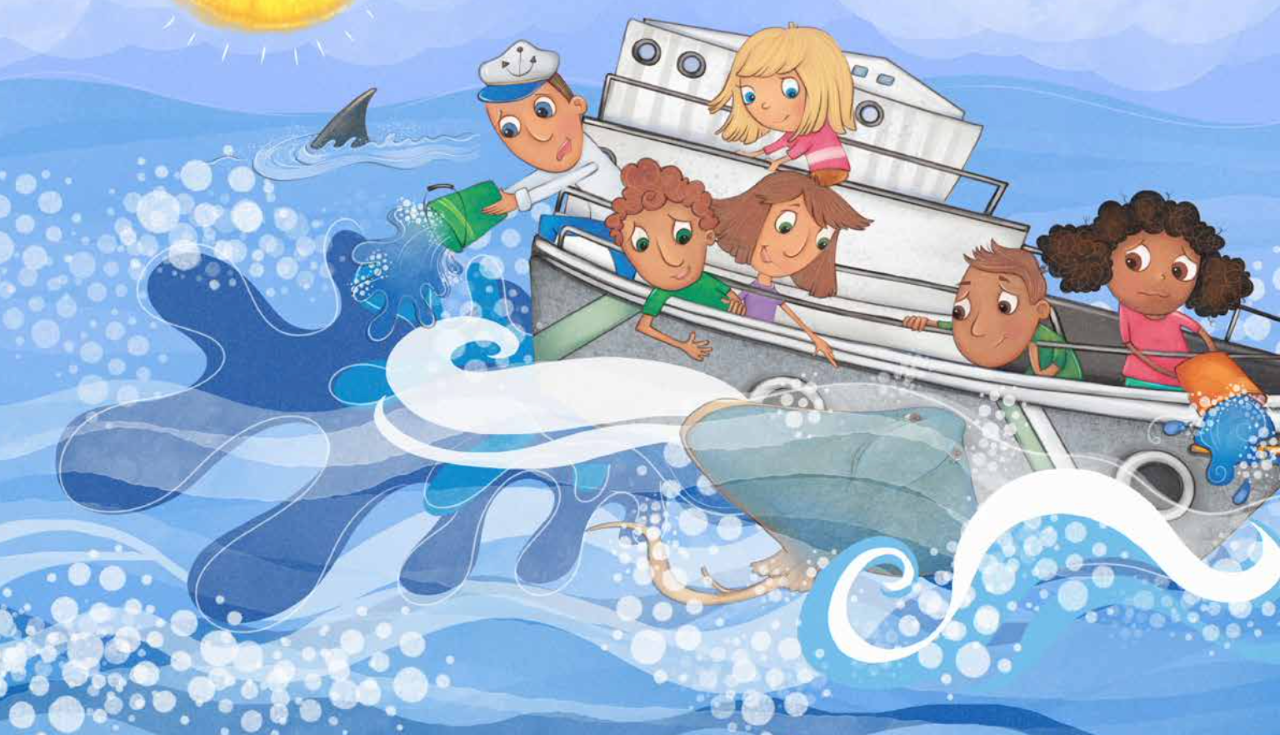 Shark bait means someone in an unsafe position. Little Ray and his friends are at risk in Little Ray & Shark Patch Things Up. Shark did not abandon ship after making a hole in it.

Little Ray worried that he caused the shark attack by making waves around the boat. He had been entertaining the boating family with his flips and bends and turns.

Erratic, splashing motions attract sharks. People may get sampled out of curiosity. It is wise to stay in shallow, clear waters near shore. Movement in murky water is risky.

Jumping into the water is noticed by sharks. Most ocean-goers fear bites from these potential killers. Comfortably on top of the food chain, these fish show no sense of danger.

It is risky to block a shark's travels. An adult person looms large in water. Aggressive species may launch attacks when provoked by unwanted activities in their territory.

It is not smart to bump into or touch wild stingrays or sharks. Angry or frightened animals can turn on perceived enemies with mind-boggling speed and life-threatening weapons.

It should come as no surprise that boaters step out of their crafts to enter the water. Far from shore, the ocean is a place of danger. Sharks lurking under the waves are natural swimmers.

Sharks move. They migrate north in summer and south in winter. Reversing this schedule makes anyone terrified of bites less likely to meet up with sharks or risk becoming bait.

Boaters feel attractions to water. They are drawn to the physical health and wellbeing experienced while circulating within the aquatic world. They may develop close bonds with nature.

Many parents prohibit their kids from taking lessons on boards in the water. Scary shark potential, business liability and loss of business brought an end to surfing lessons in some places.

Splashing while paddling surf boards to surfing zones and falls into shark-infested waters invite problems. Fortunately, these bold animals of prey may not waste energy on troublesome catches.

Calmly leave the water or form a group. Hitting an advancing shark with an object or punching it in the eyes, gills or snout may stop the attack. Cuts and scrapes may result from sharkskin contact.

Back away from sharks or stingrays to avoid threatening them. Do not turn your back on them. Always maintain eye contact, remain alert and be ready to protect yourself.

Stingray stings can be avoided. Entering and moving through the water with Little Ray's Stingray Shuffle dance should keep them away. It is unwise to challenge their powerful defenses with carelessness.

Sharks are stealthy. They circle and spin to approach from behind or below. Unaware victims risk being sampled. Fortunately most sharks reject bony humans as foodstuff.

Unless angered, sharks may approach humans more slowly and cautiously than known prey. They may not fear people, but they are not familiar with the hunt or the taste experience.

Water activities put humans in the territory of these taste testers. Sharks do not put up with nonsense. They dine on stingrays and barracudas. Rafts and surfboards don't scare them.

A child, who has never seen sharks, may feel no fear. A child, who has seen a film or a picture of a shark-caused death or injury, may not want to go near the ocean. Adults may avoid hot-spots.

People should be frightened to learn that sharks and rays are endangered by overfishing, pollution and climate change. Many species already have disappeared.

Tooth replacement distinguishes these fish. Sharks shed and replace tens of thousands of teeth in their lifetimes. Humans have the same genes, but replacement stops with the second set of teeth.

In Little Ray & Shark Patch Things Up, a stingray and a shark earn respect in a shark bait feeding frenzy adventure involving a boating family while nobody is shark fishing.

A nearby, dark shadow in the water rarely gets scrutiny. Viewers in Little Ray’s shark book dash to safety. Sharks have an inescapable presence on many beach-goers' minds.

Facts and team-building can change sharks' woeful reputations. Transcript: “Join with the best and respect the rest. We never know how things will go.” (34 seconds)